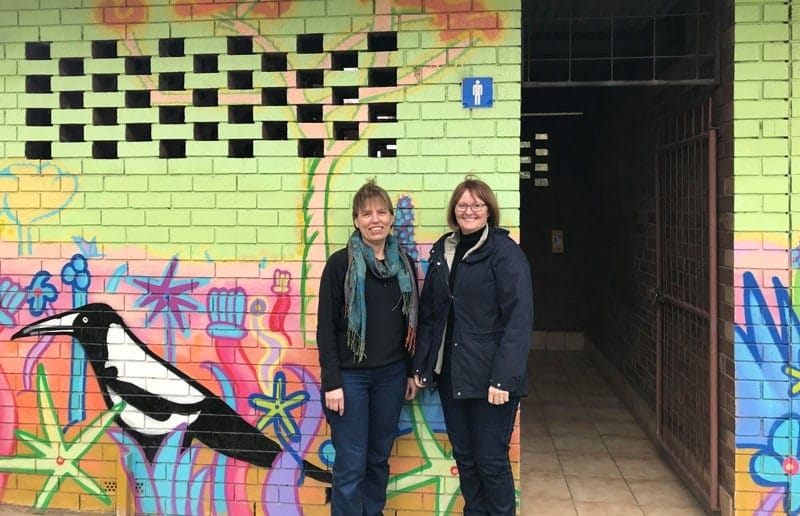 The South Australian council of Gawler, in the Barossa Valley, is leading the way for local government by installing continence pad disposal bins in their men’s public toilets.

Women’s health nurse and Continence Foundation member Julie Tucker (pictured left) realised the consequences of not having appropriate disposal bins and brought the matter to the attention of Gawler Mayor, Karen Redman (pictured right), who also has a background in health.

“Talking to family, friends and colleagues, I was made aware that women’s and disabled toilets were covered but men didn’t even have rubbish bins, let alone continence bins. There are a lot of myths in the community around men’s sneaky leakage. Many thought that it didn’t happen to men and was only a woman’s problem,” said Julie.

Continence issues can affect anyone, no matter the demographic. The prevalence of incontinence is estimated at 10 to 15 per cent in Australian men, which increases up to 20 to 30 per cent in men over 70.

Inadequate methods of disposing continence products can mean a constant worry of public embarrassment and demotivate men from doing every-day things like venturing from the house. Having to carry around disposal bags and waste can be resolved with discrete sanitary bins in toilets.

Gawler Council has recognised the immense impact a small step like installing bins will have for the community.

“When the Council was considering the motion, I gave each councillor a little pack with a pad, disposable bag, wipes etc. so they could see what a person may need to dispose. I think it helped to conceptualise what people with incontinence have to contend with,” said Julie.

Councillor Redman said that the compelling continence proposal earned a positive reaction from both the council and community.

“There was unanimous support from councillors to install the bins. Members of the community I have spoken to were surprised it wasn’t already in place,” Cr Redman said.

The Continence Foundation congratulates Gawler Council on this initiative and hopes other local governments will soon follow.

“It’s clear that the lack of sanitary disposal bins in men’s toilets is a widespread problem across Australia, but immediate change can happen when communities work together,” said CEO of the Continence Foundation, Rowan Cockerell.

“What’s really exciting is that men’s groups within the community are already aware and offering to support the rollout of bins. I have now started conversations with other councils to set the seed to raise the profile of this issue in more communities,” said Julie.