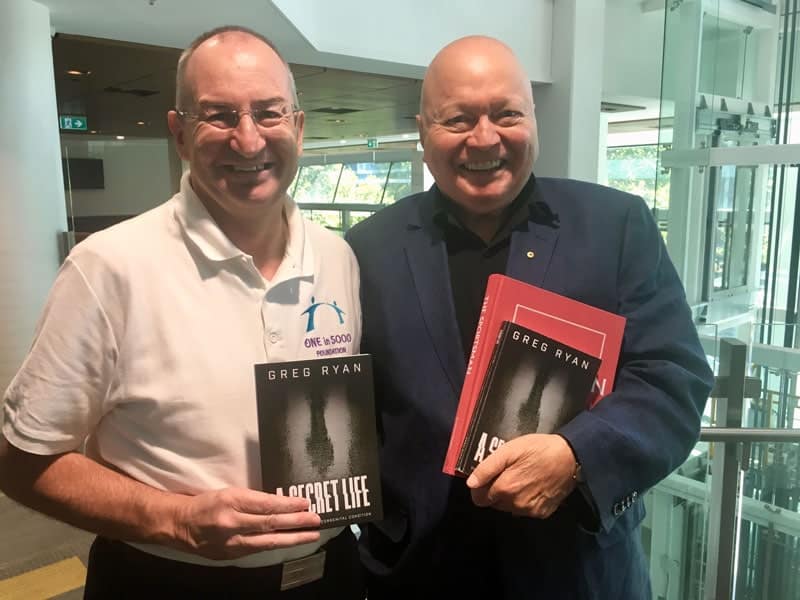 After years of surgical intervention and counselling, Greg found a pathway out of his despair. He shares his journey of courage, loneliness, and enlightenment with us.

At various times, most of us have had that uncomfortable feeling knowing something is not right with your stomach and we have to race to the toilet. But for me it takes on a different meaning, as I wasborn with a birth defect called Imperforate Anus (IA), which is also known as Anorectal Malformation (ARM).

Coupled with that I have associated major urological issues and that combination means I have had many surgeries as well as intrusive procedures (Rectal Enemas, Bowel Washouts etc.) from the day I was born to as recently as 18 months ago.

Unfortunately, due to my dysfunctional bowel and rectum/anal area, it means I must deal with the uncertainty of what may occur with my bowels every single day of my life. I learnt to cope with being known as the smelly kid at school; on the football field with my best-mates by using the strategy of rubbing dirt onto the back of my shorts, so no-one would notice the inevitable soiling patch; at high school I wore my school jumper tightly around my waist, no matter the weather, to camouflage the stain on my school pants.

Worst, when all my friends had girlfriends I was too petrified to even think of having a relationship because I had no faith in my bodily functions. As an adult my fear of inhospitable places became soul destroying. A working environment or a café or a friend’s place with no ready access to a toilet filled me with terror. Worst of all was the fear of incontinence in a moment of intimacy.

This eventually led to me having a mental breakdown in my mid 30’s. The ARM collection of anomalies is rare and because of its affects it was something that I could not discuss due to the stigma attached to toilet habits and hygiene issues. Even though we can’t live without our bowels the last thing anyone wants to talk about, or listen to, is someone’s bowel habits. It was certainly one thing I didn’t want in any conversation.

So, I chose to keep my condition as ‘my secret’ to anyone other than my parents and my doctors and, not surprisingly, I thought I was the only person with this condition. The thought that anyone would know I had an issue which was so embarrassing, and humiliating was too much for me to bear so I learnt to live my life doing everything I could to protect “my secret” from being revealed.

The secret however eventually came at a cost physically and emotionally. I lived in a state of constant anxiety. I was petrified that someone could smell me because I had had an involuntary bowel accident due to faecal incontinence or had flatulence over which I had no control. More dramatically, I sometimes felt a stool in my rectum which I had no idea was coming because I had no muscle control or feeling in my rectum.

The only place I felt safe was on a toilet. Here I don’t need to be on guard, to feel scared or anxious, to feel ashamed or embarrassed. I can be myself and not worry about ‘my secret’. But after I leave the toilet, the battle continues because I must contend with anal leakage due to not having any muscle control to prevent the normal bodily function of mucous. The mucous causes leakage which in turn causes soiling. So, I wear a female panty liner to protect myself from any soiling patch being evident. On occasions, I have to treat the nappy rash created by the acidic nature of the mucous leakage by using cream.

Everyone born with IA/ARM – and there are about two million of us alive today, along with our parents who did not have a choice about our fate – have to adapt and deal with the physical and mental consequences of this life-long condition every day. This is primarily in silence. In 2014, I was incredibly fortunate to find small online support groups catering for individuals born with IA/ARM and their families and after 50 years I realised that I wasn’t alone anymore.

Last year I decided to ‘come out’ publicly by writing a book which I naturally called A Secret Life – Surviving a Rare Congenital
Condition. My purpose was to alert everyone to the condition, encourage a dialogue and arrange better support for all IA/ARM sufferers across the world.

I am now talking to thousands of others carrying this burden, along with supporting parents and educating the medical fraternity of the physical and mental issues connected to the condition, which for so long has been viewed as a ‘Paediatric only’ medical issue. I don’t have to live with the burden of ‘my secret’ now, but still must contend with living with the physical and mental health challenges of my condition. Revealing ‘my secret’ has become a truly wonderful feeling. Now I feel free to talk openly and contribute to spreading awareness without that fear of being exposed.

The proceeds from the sale of Greg’s book ‘A Secret Life’ will be distributed to his non-profit organisation ONE in 5000 Foundation. Visit their website to find out more or order a copy of the book.

To get help for bladder, bowel and pelvic floor health problems, call the free National Continence Helpline on 1800 33 00 66 or talk to a doctor or continence specialist.