Put a bin for the blokes in your toilets 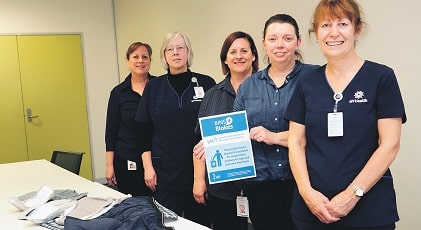 Put a bin for the blokes in your toilets The Continence Foundation of Australia is promoting its Bins 4 Blokes program during World Continence Week and the team at GV Health Regional Continence Service is eager to roll it out across the Goulburn Valley.

Alongside a sharp focus on men’s health and incontinence issues, World Continence Week will also be promoting the Bins 4 Blokes campaign this year. Launched last year by the Continence Foundation of Australia, Bins 4 Blokes is an Australia-wide awareness campaign that promotes the availability of bins in male public toilets for disposal of continence aids. Incontinence is often linked with prostate problems, cancer, diabetes, cardiovascular disease, higher body mass index (BMI), older age and people with intellectual and physical disabilities.

Across Australia, 1.34 million men and boys experience incontinence and due to the lack of sanitary bins in male public restrooms, they are often unable to dispose of their incontinence pads and pants. GV Health Regional Continence Service continence nurse advisers Rachael Ormond and Heather Newbegin said itl was an ongoing issue they often see their clients struggling with. “There was a recognised need that we‘ve been lacking in men‘s toilets for disposal of continence aids, and this can cause them to feel stressed or anxious and avoid situations and maybe stop being involved in activities that they’d otherwise enjoy,” Heather said. “It’s about a lack of dignity for men with incontinence.

Female toilets have bins, but male toilets don’t, and it should be homogenous. Everyone should have a place to put their waste,” Rachael said. Another initiative of the Continence Foundation of Australia is its National Public Toilet Map which identifies the location of public toilets anywhere in Australia. The aim is for this to eventually incorporate pins on the map that show where Bins 4 Blokes are located, but for now, it starts at a local level. With 547 local governments and more than 19,000 public toilets across Australia, the Bins 4 Blokes campaign is encouraging local businesses and agencies that provide public toilet facilities to put an incontinence bin in their male toilets.

Over the past 12 months, GV Health Regional Continence Service has installed bins for continence products in three of its male toilets across GV Health and is in the process of working with more organisations and businesses to do the same. “We‘re just hopeful that people will get on board and initiate putting a bin in their own toilets because they see a need and that it will actually make a big difference for men in our community,” Heather said. If you’re interested in participating in the Bins 4 Blokes program or are looking for more information on it, visit the website at www.bins4blokes. org.au or have a chat with the Regional Continence Service team at the GV Health Community Hub at 121-135 Corio St, Shepparton.